India gets its energy from many different types of sources. These are classified into different groups. 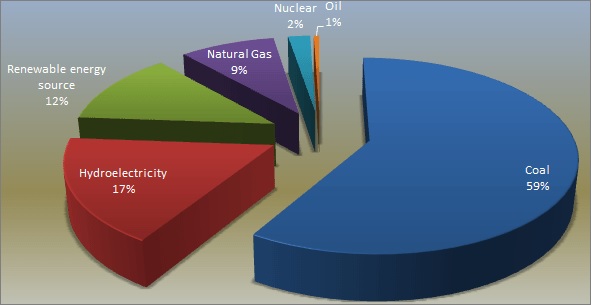 These resources are limited in supply and cannot be renewed easily. Due to the population explosion, modernization, and industrialization, the demand for energy resources is increasing day by day and to control this energy crisis there is a need to conserve conventional energy resources.

There is also an eminent need to explore alternative sources of energy.

It is a situation in which the resources are less than the demand. In the past few decades, the demand for energy resources has been very high but the supply has been short which created an energy crisis.

The major causes of the Energy crisis are:

The quality of coal is determined by its carbon content. The major coal-producing areas of India are as follows- 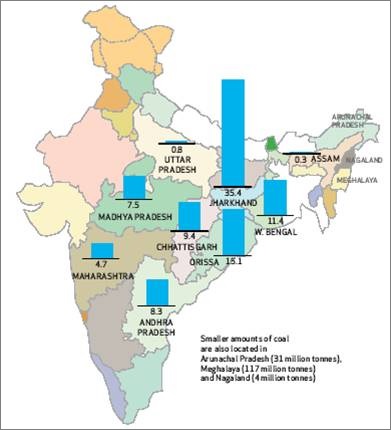 Chhota Nagpur Region is the hub of 90 % of Indian minerals. The major problems with Indian coal are:

It is the best quality coal having approx. 90 % carbon content. It burns without any flames and gives very little smoke & ash content. It is only found in the J&K region of India.

It has 70 to 90 % carbon content. It is used in making coke and most common type of Coal in India.

It is the first transformation of wood into coal and has nearly 40 % carbon content. 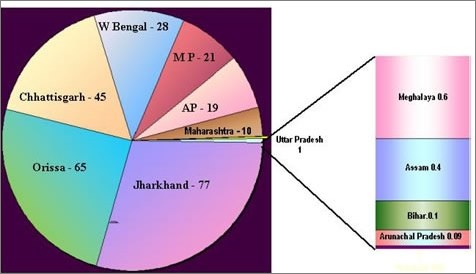 It is formed by the destructive distillation of coke. It is high in carbon content. Heating of coal in the absence of oxygen to burn off volatile gases.

It is found in sedimentary rocks of marine origin and formed by the decomposition of tiny marine creatures, plants & vegetation under mud, silt & sand.

Over the years, it underwent chemical changes to form crude oil & natural gas under the action of heat & pressure.

It mainly contains methane and is found in association with mineral oil. 75 % of Natural gas lies in Bombay high & Bassein oil fields.

The largest share of Natural Gas is as follows -

This fuel is derived from Nonfossil plants. In India, mainly centers around the cultivation & processing of Jatropha plant seeds, used in the production of Bio-Diesel and encouraged only on wasteland/government/forest land.

It is not allowed on fertile land. It is also used to produce ethanol from sugarcane (Bio-ethanol).

It is Eco-friendly, Clean & Renewable, and counted under New renewable energy sources. The Central electricity authority (CEC) has estimated Hydel power potential of 84000 MW at 60 % load factor from 39000 MW at present.

Nuclear energy is obtained from atomic minerals such as Uranium, Thorium, zircon, beryllium. It provides colossal energy through a small quantity of substance and it is very economical & does not produce greenhouse gases that pollute the atmosphere. 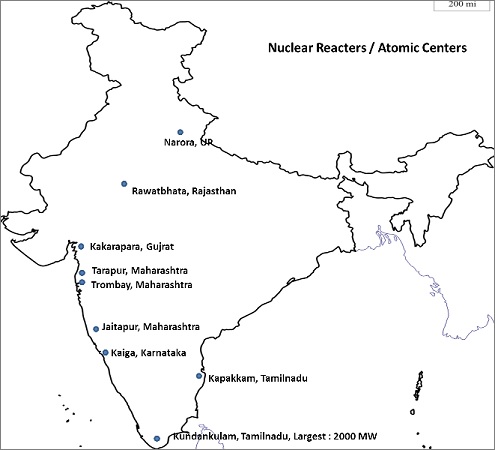 It is a Non-conventional Renewable source of energy. It has a high cost as compared to the efficiency of power generated. Nagercoil (TN) and Jaisalmer (Rajasthan) are well known for the effective use of wind energy in the country.

It is a Non-conventional Renewable source of energy. It has a high cost as compared to the efficiency of power generated. India plans to add 20000 MW of solar energy by 2022 under Jawahar Nehru National Solar Mission.

It is a Non-conventional Renewable source of energy. The oceanic tides are used to generate electricity.

Floodgate dams are built across inlets and during high tides, water flows into the inlet and gets trapped when the gate is closed. After the tide falls outside the flood gate, the water retained by the floodgate flows back to the sea via a pipe that carries it through a power-generating turbine.

It refers to the heat and electricity produced by using the heat from the interior of the Earth. It exists because the Earth grows progressively hotter with increasing depth.

The groundwater in these areas becomes very hot as it absorbs heat from the rocks. It becomes so hot that when it comes out, it turns into steam. This steam is used to drive turbines which generate electricity. 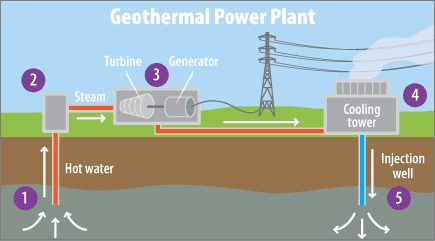 The energy is produced from organic waste such as farm waste, shrubs, animal, and human waste. It is converted into energy by direct combustion or by conversion of such wastages into alcohol, methane, or other storage fuels.