The government subsidized the power supply and provided cheaper credits to farmers and better roads. They set up FCI to provide MSP to farmers, adequate public distribution of food grains, and stabilize the market volatility.

The government also set up the Indian Council of Agricultural Research (ICAR), agricultural universities, animal breeding centers for research and development of different activities in agriculture. Government also launched programs for better use of land and irrigation. These programs were:

It was a flagship program of the Ministry of Rural Development with aims:

This program actually consisted of 3 major programs which were:

It is a technique used for collecting, storing, and using rainwater for landscape irrigation and other uses. The rainwater is collected using various manmade catchment surfaces. 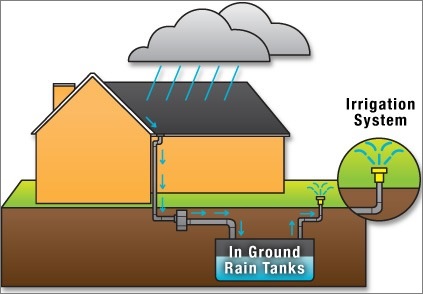 It was a program under the Ministry of Rural Development (Department of Land Resources). Desertification is the degradation of land in any dry land by:

It was started in both the hot desert areas of Rajasthan, Gujarat, and Haryana and the cold deserts of Jammu & Kashmir and Himachal Pradesh. Its objectives were:

It focused on the non-arable land and drainage lines for in-situ soil and moisture conservation. It included agroforestry, pasture development, horticulture, and alternate land use. It was under the Ministry of Rural Development (Department of Land Resources).

It was a watershed project to be co-terminus with village boundaries. Its objectives were:

It was under the Ministry of Rural Development (Department of Land Resources). It was for improving the productivity of waste & degraded lands keeping in view poverty, backwardness, gender & equity.

It excludes the use of manufactured fertilizers, pesticides, insecticides, fungicides & herbicides and strictly prohibits the use of plant growth regulators, livestock antibiotics, food additives, and genetically modified organisms. 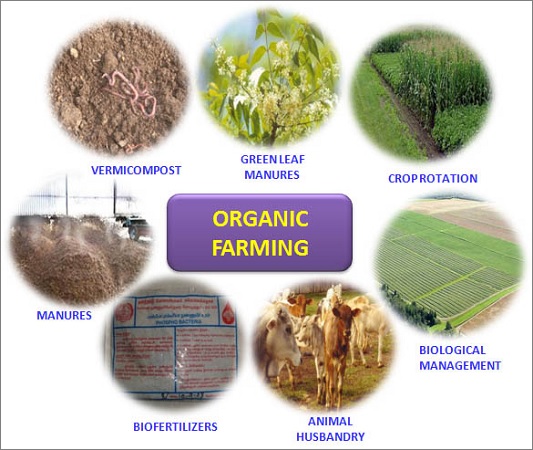 It relies on techniques such as crop rotation, green manure, biofertilizers, compost, and biological pest control to maintain soil productivity. It also relies on ecological processes, biodiversity and cycles adapted to local conditions, rather than the use of inputs with adverse effects.

It is a type of cover crop that is grown to add nutrients and organic matter to the soil. It is grown for a specific period of time and after that, it is plowed and put into the ground while it is still green or shortly after flowering.

It provides subsidy on purchase of seeds & on cost for production of seeds for green manure plants and it is of two types:

Organic fertilizers are derived from animal matter or vegetable matter.

The biofertilizers contain living microorganisms that, when applied promote growth by increasing the supply or availability of primary nutrients to the host plant.

These fertilizers take time to enrich the soil but once it is done, it lasts long and is completely sustainable. 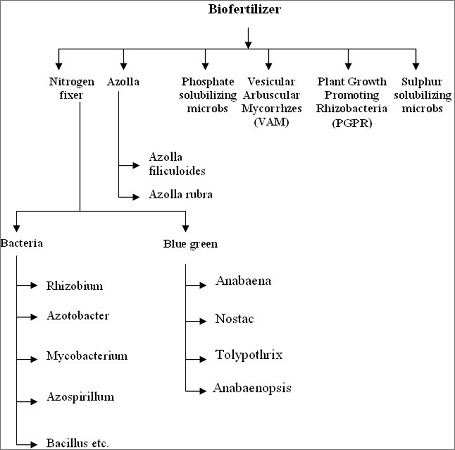 A fertilizer is any organic or inorganic, natural, or synthetic material added to soil to supply one or more plant nutrients essential to the growth of plants. These fertilizers provide 6 macronutrients & 8 micronutrients to plants for well-balanced growth.

In India, Urea is the only controlled fertilizer, which is sold at statuary notified uniform sale price while the Phosphoric & Potassium fertilizers are under a decontrolled regime & are sold at indicated MRPs.

This scheme is for 22 grades of decontrolled fertilizers, which are provided to farmers at subsidized rates based on nutrient content (N, P, K & S) in these fertilizers. There is an additional subsidy provided on the fertilizers fortified with other secondary micronutrients & micronutrients as approved under the Fertilizer control order (FCO).

The subsidy given to companies is fixed annually on the basis of nutrient contents while the MRPs of fertilizers have been left open and manufacturers are allowed to fix MRPs at a reasonable level.

However, Urea is not covered under the NBS scheme and the government continues to provide subsidies on urea separately. As a result:

It is the modified form of agricultural plants to enhance desired traits such as increased resistance to herbicides or improved nutritional content. In this, the latest molecular biology techniques & genetic engineering are used and plants are undertaken breeding to get the desired results.

Last decade, Genetically modified (GM) crops were introduced esp. for Cotton & Brinjal in India but as of now only GM Bt. Cotton production is allowed.

GM Foods have the potential to solve many of the world’s hunger and malnutrition problems and to help protect and preserve the environment by increasing yield and reducing reliance upon chemical pesticides and herbicides.

However, there are a lot of challenges standing in front of the government for safety testing, regulation, international policy, and food labeling. It should be done very carefully to avoid any unintended harm to human health and the environment.

India has the largest population of livestock in the world. The largest number of cattle in India found is found in MP & UP. Maharashtra (1) & Haryana (2) have the highest livestock density and cattle density in India is 12.8 cattle/100 Ha.

It belongs to the Bamboo family and is indigenous to India. It requires no from with moderately warm climate with an average temperature of 20 to 27* C. It requires an average rainfall of 75 to 150 cm.

It requires the same climatic conditions as wheat and it can be grown in areas of poor soil with less rainfall.

It is obtained from the latex of plants (Heavea Brasitiensis). It requires an average rainfall of 250 cm with an average temperature of 20 to 30* C.