Agriculture is the backbone of the Indian economy. Approx. 49% of the total population of India depends on agriculture. The net sown area still accounts for about 47% of the total cultivable area of India.

Agriculture provides a market for many agricultural finished products and also helps in better distribution of income and wealth among the people.

India is ranked number one in the production of Milk (17% of world production), Mango, banana, coconut, cashew, papaya, peas, cassava, and pomegranate and is also the second-largest producer of vegetables, fruits, and fish in the world. 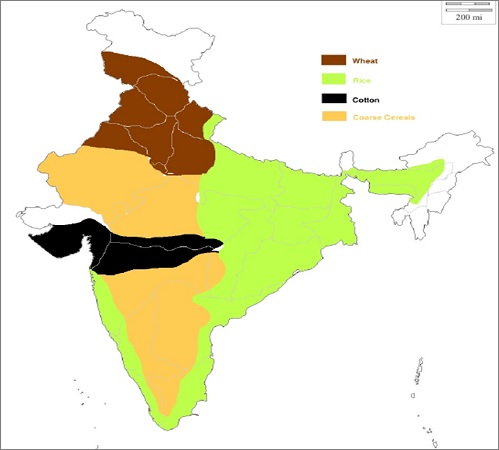 Despite all problems and everything, India is still the largest producer and exporter of spices, Millets, Pulses, Dry beans, and Ginger. India has three main cropping seasons which are:

These are also known as Monsoon/Summer Crops and they require plenty of water. These crops require long hot weather for growth.

These are also known as Winter season Crops and they require less water. These crops require cold weather for growth.

These crops are sown between Rabi & Kharif crops i.e. from March to June. It requires warm dry weather for growth & a longer day length for flowering.

Causes for the backwardness of Indian Agriculture

Even after so much modernization and everything, Indian agriculture which is the backbone of our economy is still considered backward due to the following reasons:

As long as these reasons prevail, Indian agriculture will be termed backward.

Despite all these problems, there are some solutions that can help Indian agriculture which are as follow:

These solutions must be put in action for the revival of Indian agriculture but based on the current situation of agriculture, it can be seen nothing of this sort is being done.

It is a frequent, slow application of water, drop by drop at the plant base through a network of pipelines and it is most suitable for arid, semi-arid & rainfed regions where dry farming is practiced.

It is also known as low-flow, Micro, and Trickle Irrigation. Even NABARD provides subsidized loans to farmers to buy sprinkler & drip irrigation systems.

It is the science of cultivating soil, raising crops, and rearing livestock including fishing and forests.

It is the net Cropped area and Fallow Land which is the total Cultivated Area.

It is the total area sown in the country and it is also known as the net sown area. In this, the area that is sown more than once in a year is only counted once.

It is the land left out of cultivation for a definite period of time to restore its fertility.

It is the total area sown more than once in an agricultural year and net sown area. It is also known as Gross Cropped Area.

It is the no. of crops raised on-field during an agricultural year. It is calculated as (Total Crop Area / Net sown area) * 100. It is around 132 % for India.

It is the ratio of Output to input where input includes manpower, seeds, fertilizers, pesticides, etc.

It is Intensive agriculture where heavy manpower & inputs are deployed. It is used in Japan and India.

It is extensive agriculture where very large land holdings & very little manpower is required. It is done in the USA, Russia, Canada.

It refers to the proportion of area under different crops at a given point in time. The cropping pattern in India shows greater production of food grains than non-food grains.

In this, the farmers grow the crop with the aim of selling it in the market i.e. for monetary purposes. It is also known as cash crops. For Example - Cotton, Sugarcane, Tobacco, Tea, etc.

In this, a large-scale farming of one crop resembling factory production. Processing and marketing of the final products is done. For Example - Coffee, Rubber, Coconut, Spices, etc.

These are cash crops that yield fibers. These are used for making textiles or packaging materials. For Example - Jute & Cotton.

These are harvested when green and used as cattle fodder ex. Berseem. Some fodder crops can also be matured as food grains ex. Jowar.

It is also known as Multiple cropping. In this, two or more crops are grown simultaneously on the same field. It increases the crop yield & Fertility of soil.

It is the cultivation of crops together with the rearing of animals. Fodder crops are an important component of mixed farming along with other crops.

It is adopted in areas where rainfall is less than 75 cm/year. Draught resistance crops are grown as they require less irrigation. It is also known as Rainfed Farming.

It contributes to 40% of the food production and provides support to nearly 45% of the population.

It is practiced in high rainfall and irrigated areas.

It is the farming on steps cut on the mountainous region. It is mainly done to prevent soil erosion and it provides easy irrigation.

In this, the farmers try to get a greater output by bringing more and more new land areas under cultivation. The agriculture at the large farm with extensive use of machinery.

In this, the landholding is small which is intensively used by means of labor provided by family members. So, the Yield/Area is high but Yield/Labour is low.

This is the type of farming in which the main production is consumed by the farmer's household. For Livelihood, Small land area & Great no. of labors.

In this, the farmers clear the forestland and use it for growing crops. Here the crops are grown for only 2-3 years and when the fertility of the soil decreases, they move on to new lands.

It is also known as Slash & Burn agriculture and is wildly practiced in East India, Central Africa, America.

In this, intensive cultivation of vegetables, fruits, and flowers is done.

In this, animals are reared for milk & the main emphasis is on cattle breeding & veterinary services. The Rearing of Milch animals is an important aspect of Dairy farming.

It is practiced in Mediterranean lands surrounding the Mediterranean Sea. It is a highly specialized commercial agriculture, done mainly for citrus fruits.

It is the cultivation of high valued day-to-day market crops like fruits, flowers & vegetation. These are grown on small farms which are well connected with urban markets by cheap and efficient means of transportation.

In this, the farmers voluntarily pool their resources together like land, machinery, etc. to form a cooperative society. These cooperative societies help farmers to procure more inputs, sell farm products at the best prices & procure essentials in quantity at cheaper rates.

It is State-owned agriculture done especially in socialist countries like Russia. Here, the farmers pool their resources together to achieve yearly targets set by gov. to sell their produce at fixed rates.