There is 3 prime Watershed of River Origin in India namely:

The rivers of India can be categorized into 4 categories on the basis of their origin which are:

Ganga is the largest river in India followed by the Godavari. The top 5 largest rivers of India are: Ganga > Godavari > Krishna > Yamuna > Brahmaputra.

It originates from Chemayungdung Glacier (Kailash Range, Tibet). It forms Grand Canyon in Tibet and it turns southward near Namcha – Barwa.

It enters Arunachal Pradesh as Dihang River at Sadiya, emerging from the mountains. Then, it is joined by the Dibang river from the north & the Lohit river from the south and came to be called the Brahmaputra. 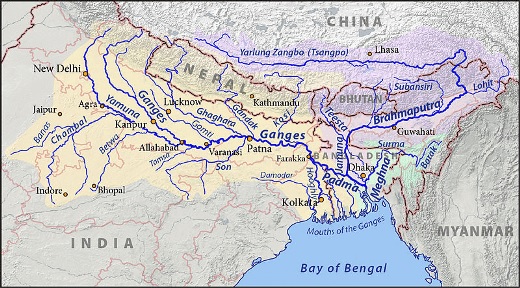 It is a major tributary of the Brahmaputra. It rises from Sikkim.

Another major tributary of Brahmaputra. It flows through Arunachal Pradesh.