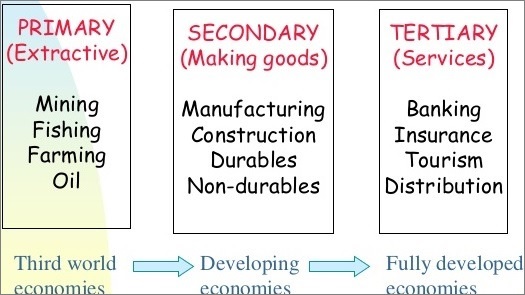 It uses the material obtained from primary industry to make complex products.

The Secondary industry can be further classified into two categories.

It is not a branch of manufacturing but it sells the products of primary and secondary industries by transport, trading, wholesale & retailing.

Any industry has to take into account these factors before deciding its location. These factors are: 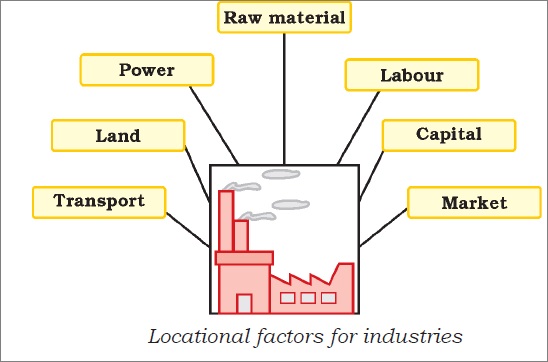 Need for Industrialization in India

Why decentralization of industries

The decentralization of industries should be done as it brings:

It is not like everything is good about Industries as there are certain aspects of industries that also hurt us. Industries are known to pollute the environment as:

However, there are few solutions that can solve the following problems.

It provides millions of jobs to people and also keeping the migration of rural people to urban areas. It can be started with low investment and uses local raw material which is optimum utilization of national resources.

It is dependent on bamboo, softwood and requires near raw material & market.

Fishing in India is more developed along the Western coast as compared to the East coast due to the following reasons:

Cotton as a raw material doesn't have much weight and it is non-perishable. Even when it is changed to yarn/textile, it hardly has much weight. So, proximity to raw material sites is not essential as it doesn't offer great cost-saving in transportation. Therefore, other factors become more important in industrial locations such as:

Climate as a factor

In the dry climate, the cotton threads will break quickly during spinning which will halt the machine and someone has to join the threads again to kick start the operation again which is not good for mass production.

In humid conditions, the thread will rarely break. That is why cotton textiles were set up near coastal areas but now there are humidifiers that can artificially increase the air moisture in factories/workshed. So, a factory can be set up anywhere and can be run efficiently, irrespective of the climate outside.

Challenges faced by the cotton industry

The production of cotton is uncertain and it fluctuates depending on the climatic conditions. Hence, the supply is irregular.

India has a huge market and vast labor to match silk farming. India grows all important varieties of silk such as Mulberry, Tasar, Oak Tasar, Eri, and Muga but still, the demand is greater than the production and hence, India has to import silk from China especially bivoltine mulberry silk.

The raw material (Mulberry plants) can be grown in any type of soil even in forest fringes, hill slopes and it has the tendency to even withstand drought. It works well in non-green revolution, non-irrigated areas of East and NE India.

Wool as a raw material is non-perishable and lightweight. Indian wool consists of coarse fibers which irritate the body. So, we have to import Australian wool for decent apparel.

For non-apparels, New Zealand's wool is mixed with Indian wool to produce decent Carpets, blankets, etc. Hence, the location of woolen textile is not tied to the raw material sites.

Wool has good demand in North India as the winters get very cold. That is why nearly 75% of industries are concentrated in the Northern States. Parallel to the wool-market factor, you can see that the Cotton textile industry is profound in the southern half of India because warm-humid climate hence more demand for Cotton garments in south India than woolen.

It is mainly based in West Bengal (India). 90% of Jute is cultivated in the Kolkata hinterland and it is the only crop that can withstand the flooding of this region.

There are Vineyards in Himachal, Nashik, and Bangalore due to favorable climate & soil conditions.

The sugar mills are located near the sugar-growing areas because of two factors:

Sugarcane contains sucrose & once you cut the sugarcane, the sucrose content starts to decline. Hence raw material must be quickly transported.

Sugar accounts for only 10% of the bulky sugarcane and therefore it is prohibitively expensive to transport sugarcane over long-distance in its original form.

South India has no loo, no frost, and the moderating effect of the ocean. So, it has an ideal climate for sugarcane growth. However, the sugarcane cultivates/industry in South India is not as large as the UP-Maharashtra belt as:

Now, the sugar industry is shifting to South India from North India because:

Weeding, manure, pruning, and plucking are tedious jobs and need skill with patience. So, a cheap female labor force is essential as tea has to be grown in hill slopes, mechanization is not possible.

Tea leaves to tea involves considerable weight loss. Therefore, tea processing is done in the estate/plantation itself. Further blending/repacking could be done at the break of the bulk location. For Example - port cities like London.

Tea doesn't like stagnant water, therefore, it has to be grown on highland or hill slopes. For Example - the hills of Darjeeling, Jalpaiguri (West Bengal) & Nilgiri (Tamil Nadu).

The Western Ghats & Nilgiri Hills region is suited for both Tea & coffee.

Red soil is best suited and hilly areas so that there is no stagnant water.

Coffee is grown on the Northern and Eastern slopes of the Ghat because coffee hates direct sunlight. The temperature stays nearly 25* C throughout the year.

Kochi port to (mostly) Italy and there is a local demand in South India.