There are 4 types of climatic seasons in India:

Agriculture is the main occupation of people in India and the Southwest monsoon control agriculture. If the monsoon fails, there will be drought and when it is too heavy, it will cause floods leading to the destruction of property and life.

The rainfall in India is seasonal and uncertain. It is also unevenly distributed and mainly pours down during the South-West Monsoon period. 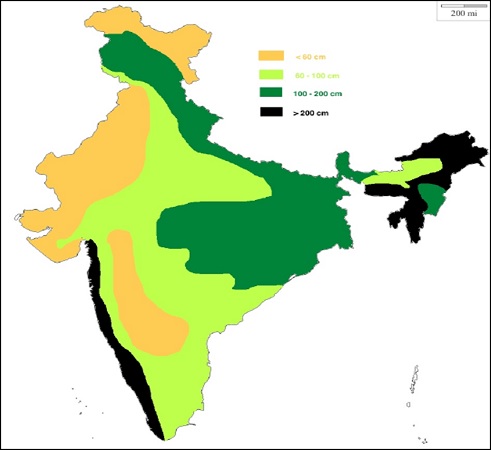 India can be divided into 5 major rainfall regions on the basis of the quantity of rainfall which are:

This region has a rainfall of 30 to 60 cms annually. The regions in this group are -

Zaskar range, parts of Punjab and Haryana, Central Rajasthan, Western Gujarat, and the rain-shadow areas of the Western Ghats

This region has a rainfall of 60 to 100 cms annually. This region is found in most parts of India.

This region has a rainfall of 100 to 200 cm annually. The regions in this group are -

The western coast, Eastern coastal belt, Foothills of the Himalayas & a part of north-east India

This region has a rainfall of over 200 cm annually. The regions in this group are -

The western side of the Western Ghats, foothills of Himalayas, Meghalaya plateau (Shillong plateau), and Andaman and the Nicobar Islands

The major factors that affect the climate of India are - 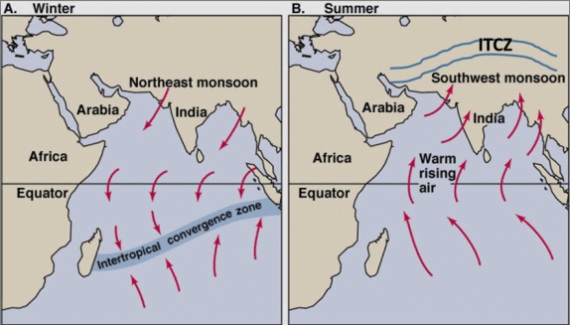 The monsoon is seasonal changes in atmospheric circulation and precipitation associated with the asymmetric heating of land and sea. The southwest monsoon brings rains towards the end of summer because the high pressure built in the Indian Ocean pushes the wind masses towards the low pressure formed on land.

Temperature Gradient is the temperature variation between the sea and the landmass.

It originates due to the Northward shift of ITCZ. The SE trade winds cross the equator which deflects & enters India as SW Monsoon.

The Easterly Jet Stream/SE Monsoon/BOB Monsoon happens due to differential heating of the Tibetian plateau & Himalayan region with respect to the Bay Of Bengal. The southwest monsoon arrives in two branches which are:

The BOB branch initially tracks the Coromandal Coast northeast from Cape Comorin to Orissa, swerves to the northwest towards the Indo-Gangetic Plains. 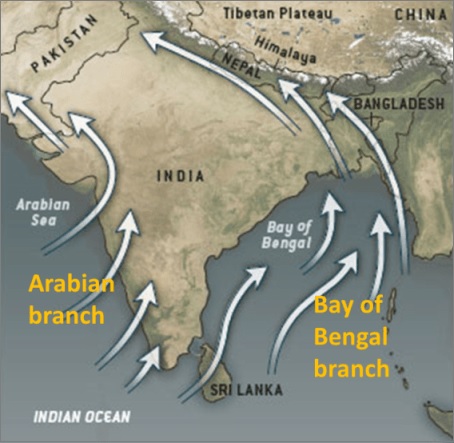 The Arabian sea branch extends toward a low-pressure area over the Thar Desert and is three times stronger than the Bay of Bengal branch. It moves northeast towards the Himalayas.

The southeast monsoon basically reaches Indian territory around 25 May. It first hits the Andaman and Nicobar Islands in the Bay of Bengal. It reaches the mainland of India by 1 June when it reaches the Malabar Coast of Kerala. 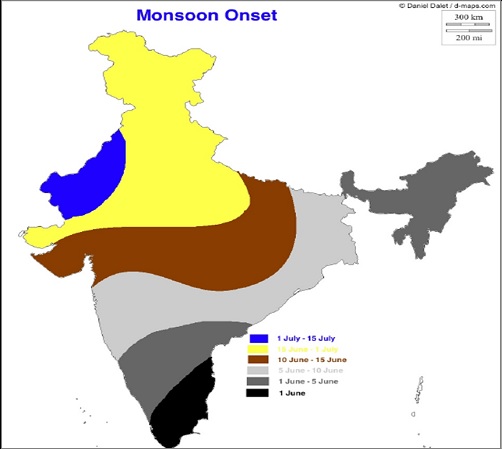 The Monsoon clouds start withdrawing from North India by the end of August. It withdraws from Mumbai around 5 October. India cools down during September making the Southwest monsoon weak. So, it leaves the country by the end of November. 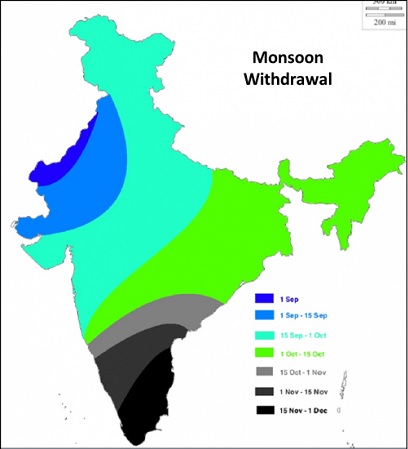 It stikes the Western Ghats and gives rainfall to the westernmost regions. It moves parallel to Aravallis & Strike Himalayas. 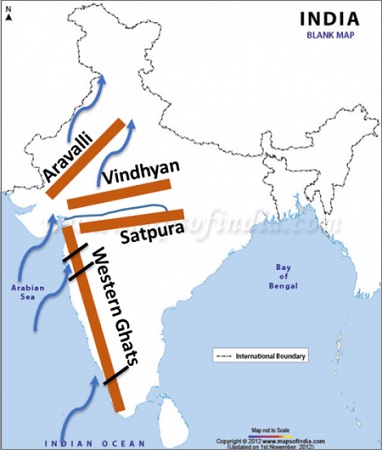 It provides rainfall at Northern East plains and Northern Plains. 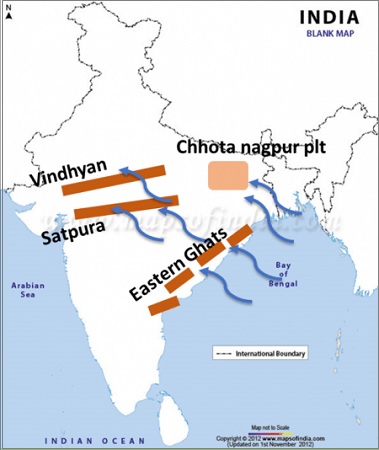 Around September, when the sun retreats south, northern India cools off rapidly. Due to this, the air pressure builds over northern India but the Indian ocean still holds its heat. The surrounding atmosphere still holds its heat Indo-Gangetic Plain towards the vast spans of the Indian Ocean south of the Deccan peninsula. This is known as the Northeast Monsoon or Retreating Monsoon. 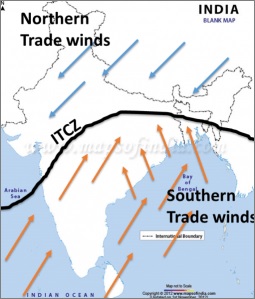 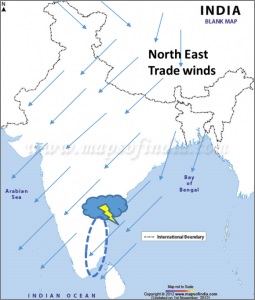 When these NE monsoon winds move towards the Indian Ocean, the dry cold wind picks up some moisture from the Bay of Bengal and pours it over peninsular India and parts of Sri Lanka.

In Southern Asia, the northeastern monsoons take place from December to early March when the surface high-pressure system is strongest.

Jet Streams are currents of air high above the Earth's surface nearly 8 to 15 km. They are near the tropopause.

Jet streams form near boundaries of adjacent air masses with significant differences in temperature, such as the polar region and the warmer air towards the equator. Westerlies flow over north India south of Himalayas all the year but in summers with a shift of the sun, they flow north of Himalayas & replaced by easterlies. 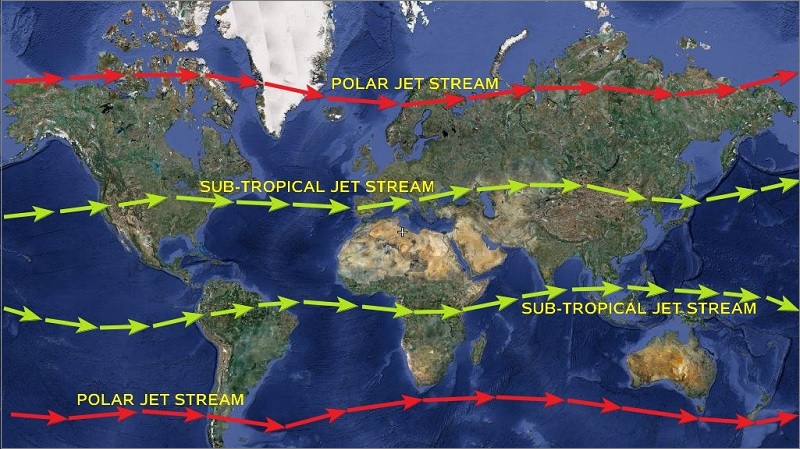 They prevail over the lower latitudes of westerlies and are produced by the rotation of the earth & its spherical shape.

It begins to flow from west to east around 30º latitude. 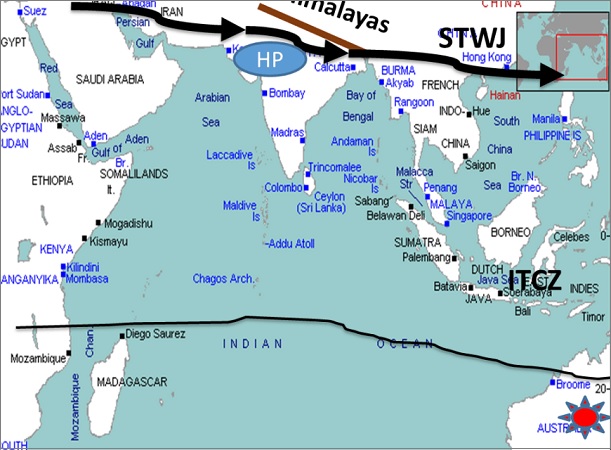 In winters, it flows south of the Himalayas – over north India. It is the major cause of the western disturbance.

During the summers, it flows over the north of the Himalayas. Therefore, there is low pressure over North India and hence, monsoon comes in summers.

This stream is also a chief reason why there are no cyclones during monsoon because it prevents the vertical circulation of air which is required for the formation of cyclones.

The sea surface temperature of the Bay of Bengal and the Arabian Sea increases in late summer. So, the possibility of a Tropical cyclone prevails. The retreating SW monsoon branch drags them towards the Eastern coast.

Therefore, any cyclones that form in the Arabian sea are likely to affect India, however, the Delta region of the eastern coast is frequently struck by a cyclone.

A tropical cyclone is a storm system characterized by a large low-pressure center and it is marked by numerous thunderstorms that produce strong winds & heavy rain.

These are the temperate cyclones or extra-tropical storms originating in the Mediterranean. It brings sudden winter rain and snow to the northwestern parts of India.

They travel from place to place due to differences in presence. The high pressure in the northwestern Indian subcontinent favors its travel. During the winters, the low-pressure system originates over the Mediterranean Sea & western Asia. So, it moves into India along with the westerly flow.

The Winter rainfall occurs due to:

The Windward regions (Such as the Western Ghats) get more rainfall than interiors. The regions obstructing monsoonal branches like that perpendicular to the Arabian Sea branch get rainfall such as Himalayan foothill states.

The scale that is used for this pattern is SOI (Southern Oscillation Index) which is:

The South equatorial current pile up water in northern Australia that increases SST and is known as West Pacific Pool.

They descend at Peruvian coast = HP – desiccating effect to Atacama desert. This completes the Walker cell. 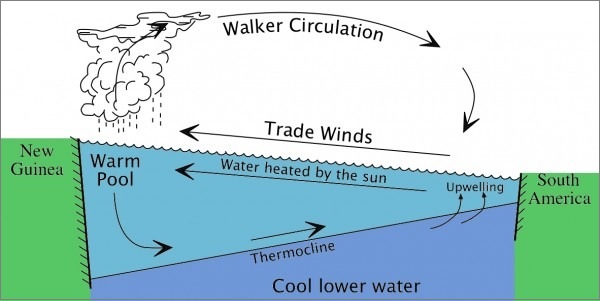 As the south equatorial current takes water from east to west, it led to water from the bottom coming up and take the space. This Up-welling at the Peruvian coast makes rich fishing ground. 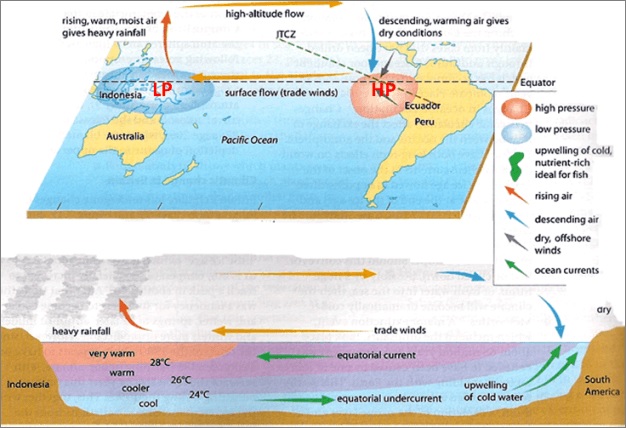 In this, the direction of the walker cell reverses. The South equatorial current weakens & strong counter-current activates which weakens the piling up of water in Northern Australia and brings a weakening of the west Pacific Pool.

The Ocean water moves towards the Peruvian coast creating an LP system over there and rainfall at the Atacama Desert. The rising and diverging wind above Peru descends over Australia = HP condition – drought in Northern Australia.

It is a warm current that appears off the coast of Peru in December (3 – 36* S of Equator), also known as child Christ as it appears around Christmas. It is the temporary replacement of cold Peruvian/Humbolt current which normally flows against the coast & appears once in 3 – 7 years.

The high pressure of the Indian Ocean & low pressure at said area of the Pacific Ocean shifts some of the monsoon winds to the Pacific Ocean side which results in scarcity of rainfall in India. It brings drought conditions in Indonesia as well – forest fire.

It means The Girl in Spanish. After the El Nino when weather conditions return to normal, trade winds become strong. Therefore, they cause abnormal accumulation of cold water in the central & eastern pacific regions. 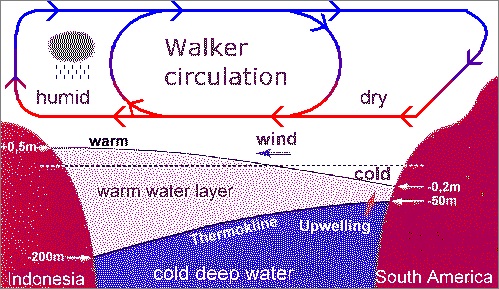 It brings heavy monsoon showers in India due to the Northeast monsoon along with monsoon laiden pacific winds from the tropical Pacific Ocean although it marks an active hurricane season in Peru.

These are the pre-monsoon showers that happen in Karnataka and Kerala that help in the ripening of mangoes. They are also known as April rains or Summer showers.

These showers are very crucial for the mango cultivators of South India as it prevents the mangoes from dropping prematurely from trees.

It is the local thunderstorms in the state of Karnataka and the associated region. These are Pre-monsoon Showers that occur in the month of April & May caused because of the meeting of humid sea winds and hot dry local wind.

These are pre-monsoon showers at Bengal & Assam.

These are the shallow cyclonic disturbances that travel to India from the Mediterranean sea and the Persian Gulf. It causes rainfall in East India.