Mineral resources can be classified into two groups which are: Metallic and Non-Metallic.

The metallic minerals are further divided into Ferrous and Non-Ferrous.

The Non-Metallic can be further divided into two groups i.e. Organic and Inorganic. 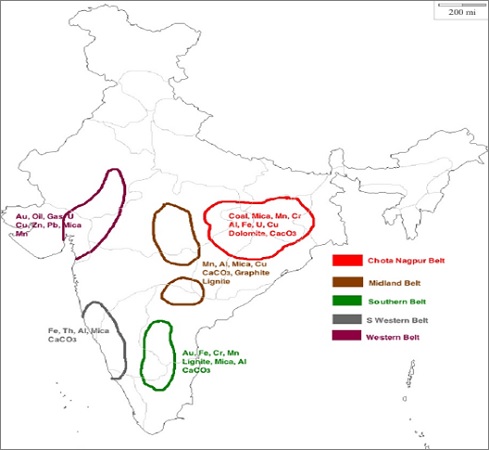 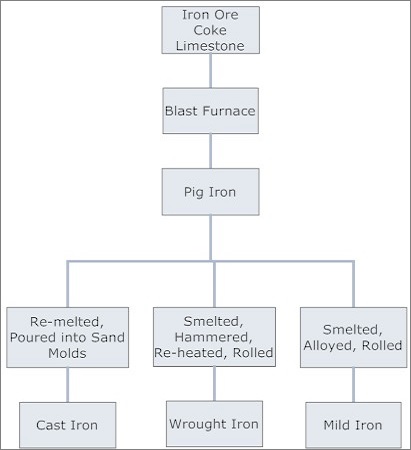 The steel industry also requires dolomite, manganese, etc. but in small quantities. So, their presence is not the main deciding factor for the location.

Until the end of the medieval period, iron production was done on a small scale as energy was immobile, and to produce five tons of iron, you had to chop down one acre of forest to get sufficient charcoal.

During the Industrial Revolution, the iron and steel industries were set up near coalmines for the following reasons:

By the early 20th century, coal and iron ore mines in US-Europe started getting depleted, so, they started importing iron ore from other countries. As a result, the iron space and steel industry started moving toward coastal sites to reduce the cost of transporting ores from port to factory via railways.

Iron ore has iron oxide but we only need the iron and thus need to get rid of the oxide. So, to remove the oxide part, we blend it with carbon to form Carbon dioxide. Coking coal has a high concentration of carbon, compared to cheap varieties of coal like Lignite. Therefore, it is used ot mix with iron ore.

However, for heating, different varieties of coal and even electricity can be used.

Aluminum is an abundant mineral in the earth's crust but for mining or commercial scale exploitation, you require a significant concentration of bauxite ore at one particular site. The Bauxite occurs frequently in the tropical areas where limestone rocks are exposed to weathering.

First, Bauxite ore is crushed, washed, and mixed with caustic soda to remove impurities, and then, it is dried in large furnaces to remove moisture content, and finally, you get alumina.

The white powder of alumina is dissolved in a bath and electric current is passed through it using carbon electrodes which convert alumina to aluminum.

It requires a massive amount of electricity that is why aluminum smelting facilities are set up near sources of cheap electricity, rather than near to raw material or near to final market.

In the 20th century, copper became important for the electric industry and the demand for it increased. Hence, new mining-smelting technologies developed to utilize even lower quality ores.

The location principle for copper and aluminum industries same, but the smelting process is different.

The Copper ore is soaked in water and mixed with oils. The copper revering matter floats on the top and is separated out for further processing. After this stage, only 2.5% of the original matter remains.

After this stage, sulfur and oxygen impurities are separated from the concentrated copper ore and blister copper is obtained. In this stage, the weight loss ratio is significant, therefore smelting is usually done near raw material. 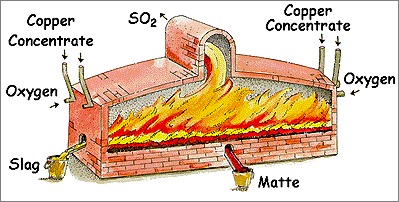 Blister copper is 99% pure metal but still, it is not suitable for manufacturing electronic wires, utensils, etc. as it contains impurities of gold, silver, lead, and zinc. Therefore, blister copper is refined via the electrolysis method.

The ore goes through smelting and then refining through Electrolysis to get Lead and Zinc. It runs on the principle that certain minerals have an affinity for certain oils, therefore, the ore is mixed with water, oil, and chemicals.