India can be divided into 6 physical divisions which are: 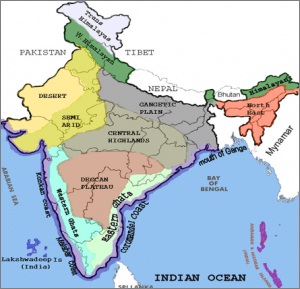 These are young and structurally fold mountains. They stretch over the northern border of India. They run in a west-east direction from the Indus to the Brahmaputra.

The variations in altitude are greater in the eastern part than the western.

The Trans Himalayas are the ranges that lie immediately to the north of The Great Himalayan Range. Most of the parts of this Himalayan range lie in Tibet and hence, it is also known as Tibetan Himalaya.

The main ranges of the Trans Himalayan system are:

These are the most continuous range. It consists of the loftiest peaks with an average height of 6000 meters containing all the prominent Himalayan peaks. The core of this part of the Himalayas is composed of Granite.

They are permanently snowed bound and a number of glaciers descend from this range. The prominent ranges of this system are: 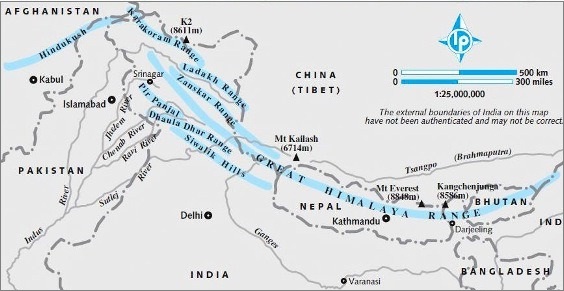 The altitude of these ranges varies between 3700 to 4500 meters. The average width is around 50 Km. The Pir Panjal range forms the longest and the most important range of this system.

Their altitude varies from 900 to 1100 km while the width varies from 10 to 50 km. The longitudinal valleys lying between the Himachal and the Shivalik are known as Dun. For example – Dehradun, Kotli Dun, and Patli Dun

The eastern border of the Himalayas is marked by the Brahmaputra. The Himalayas bend sharply towards the south forming the Eastern hills or Purvanchal. These hills run through the northeastern states of India. 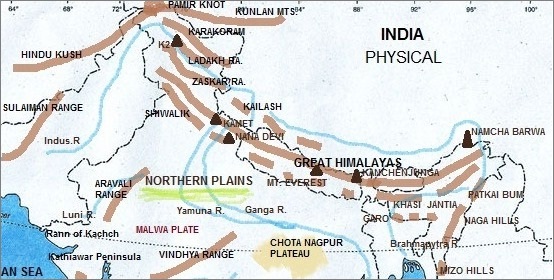 It lies between the Sutlej and the Indus. It is 560 km long and is also known as Kashmir Himalayas and Himachal Himalayas. The major ranges of this section are:

It lies between the Kali and Tista rivers. It is 800 km long and crowned with some perpetual snow peaks. It is the tallest section of the Himalayas.

It is formed by the interplay of three major river systems that are: the Indus, the Ganga, and the Brahmaputra along with their tributaries. It is composed of alluvial soil that has been deposited over millions of years.

It is an agriculturally very productive part of India because of the rich soil cover, adequate water supply, and favorable climatic conditions. It is divided into 3 sections namely: the Punjab plain, the Ganga plain, and the Brahmaputra plain. 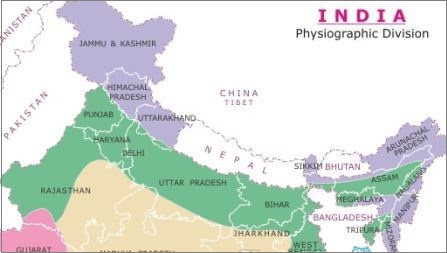 The northern plain can be divided into 4 regions based on the relief features. These regions are: Bhabar, terai, bhangar, and khaddar.

The peninsular plateau is triangular in shape and surrounded by hills. It is composed of the oldest rocks as it was formed by the drifted part of the Gondwana land. The characteristics features of this plateau are broad, shallow valleys and rounded hills.

The plateau can be further divided into two regions: the Central Highlands and the Deccan plateau. 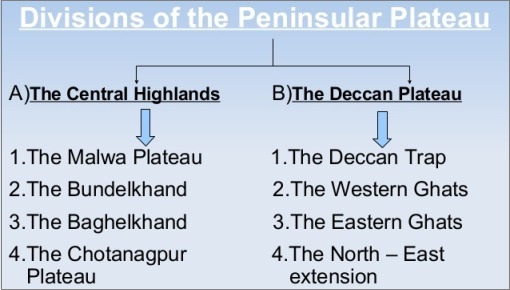 The central highlands cover a major portion of the Malwa plateau and lie to the north of the Narmada River. The flow of the rivers in this region is from southwest to northeast indicating the slope of the region.

It is the largest plateau in India and makes most of the southern part of India. It is shaped like a downward pointing triangle and lies to the south of the Narmada river.

Both these rise from their respective nearby coastal plain and almost meet at the southern tip of India. Its northern boundary is formed by the Satpura and Vindhya ranges that separate it from the Gangetic plain to the north.

The Indian desert lies towards the western margins of the Aravali hills. This region gets very limited rainfall which is less than 150 mm in a year. Therefore, the climate of the region is very arid and there is a scanty of vegetation. 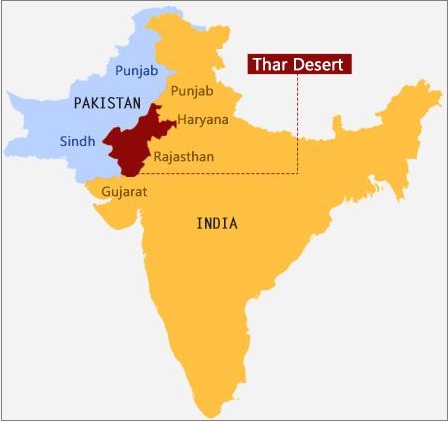 The stretch of narrow coastal strips flanks the peninsular plateau and runs along the Arabian Sea on the west and the Bay of Bengal on the east.

It is a thin strip of coastal plain and of 50 km in width which is much less compared to the eastern coastal plains.

The western coastal plain can be divided into the following sections: 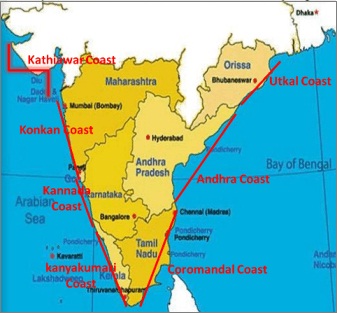 It refers to a wide stretch of the landmass of India. It lies between the Eastern Ghats and the Bay of Bengal. The plains are wider and level as compared to the western coastal plains.

It can be divided into the following sections:

India has a total of 247 islands out of which 204 lie in the Bay of Bengal while 43 are in the Arabian Sea. However, there are also a few coral islands in the Gulf of Mannar.

The southernmost point of India is in Nicobar Island and known as Indira point. It was formerly known as Pygmalion point but it submerged after the 2004 Tsunami.